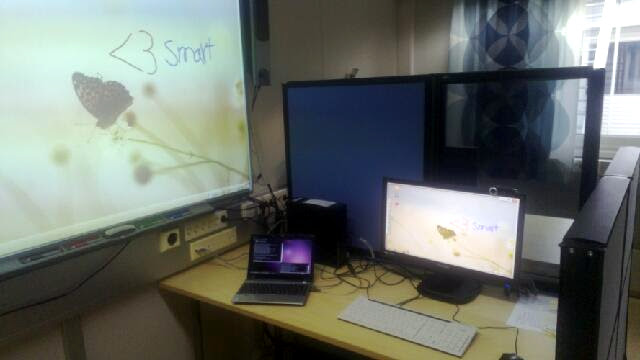 Those who are still reading this, this story describes how we debugged and got solved initially mysterious problem of oopsing kernels. It is written hoping others would find it useful and we would remember how to do something similar next time.

The story started already a year ago when we got first reports from schools about freezing computers. Soon we found out that the freezing computers had SMART Boards (interactive whiteboards made by SMART Technologies) connected to them through USB.

The software that comes with SMART Boards (Notebook and drivers) is proprietary and no source code is available. Because there was no source code to look at, Veli-Matti did some debugging with strace and patched libusb back then to find out what the driver binary was actually doing. It turned out that it was frantically scanning the usb bus, connecting to the board, writing, polling and finally closing the connection. And it looping this over and over multiple times per second.

Luckily searching revealed that “a lsusb bomb” is a good way to trigger all kinds of usb problems. After we realised that USB2 support has been problematic with SMART Boards, we realised that by disabling USB2 support the problem went away. Our problem was not the same as this article in the knowledge base, but it helped us:

Later we found out that we were not the only ones having kernel problems with SMART Boards:

After we disabled USB2 support in the problematic machines, life was good again for some time. We reported the problem and waited for a fix that never came. It was time for a real fix.

So, it was starting to be quite obvious, that the system instability was somehow caused by SMARTBoards and/or the proprietary software controlling them. The next step was to capture the oops to get a bit of a solid ground for studying the problem further.

The easiest way to capture the oops is via serial console. See Veli-Matti’s earlier post on how to do it in LTSP, but the basic setup is this:

And this is what we got:

But the problem was that it was quite difficult to reproduce. Oopsing was certain, but the time window varied a lot. Sometimes it happened on freshly booted systems almost immediately when SMARTBoard was used and sometimes it took more than a day. Without an easily reproducible method, determining whether a newer kernel would fix the problem is almost impossible. We had to come up with a method which would make the kernel oops reliably and instantly. Enter lsusb_bomb.sh:

Veli-Matti’s previous debugging work on this issue had revealed that bombing the USB bus with numerous simultaneous lsusb-processes made the whole system really unstable. And confirmed that the bug still existed in newer kernels. Running lsusb_bomb.sh on a system which had SMARTBoard plugged in and proprietary SMARTBoard software running caused the kernel to oops in a couple of minutes. The first goal of the study was achieved.

Emulating SMARTBoard with USB mouse and a custom program

At this point we had a way to crash kernel from userspace when SMARTBoard was connected to USB bus and proprietary SMART Board processes were running. But to be able to get help from the kernel community, we had to come up with more generic way to reproduce the issue. Sending kernel mailing list a bug report describing a problem which occurs only when a special device is being controlled by a proprietary software did not sound a good idea back then and it does not sound good now either. If you are able to show kernel developers how to easily reproduce the bug you are reporting, you are more likely to get feedback.

Because we were able to crash the kernel from userspace, we knew we should be able to reproduce the problem reliably with any hardware, given just the right conditions. We deciced to spy the proprietary SMARTBoard driver process by wiretapping the communication line between the process and the kernel. Sounds thrilling, but it was actually the most boring part of the debugging process. We just added several syslog() calls to different places inside libusb and replaced the libusb object the SMART Board Service was using with our own tracing version of it.

Based on the captured trace, we wrote a short program, usboops.c, which was emulating the proprietary SMART Board driver well enough (many communication details were ignored, because they were not relevant from the crashing point of view) with an execption that it was designed to communicate with an ordinary USB mouse (actually any USB HID device with an interrupt IN enpoint could be used):

And usboops.c proved to be extremely efficient. We managed to crash all test systems in matter of seconds. We found out that v3.6 did not suffer from the problem but all stable releases were crashing. Only requirements were an USB mouse and usboops.c. The second goal of our study was achieved.

Bad news was there was 11130 commits separating v3.5.4 and v3.6. Luckily, there’s a magnificient tool for hunting bugs/fixes: git bisect. Bisecting, compiling and testing -loop took only less than 4 hours (log2(11130) < 14), and lead us to a conclusion that the following commit would be The Fix:

We had achieved the third goal.

Now we were ready to report our finding to the kernel community. We had an easily reproducible bug. Check. We had bisected the history and found a commit which seemed to fix the bug but which was not part of any stable releases. Check. The bug hadn’t been reported earlier by anyone else. Check. Then, writing and reporting the bug was just a matter of being accurate and following instructions.

And the result is here: http://www.spinics.net/lists/linux-usb/msg71648.html

We got the confirmation we were asking for only 41 minutes and 15 seconds later. Crazy.

The fourth goal was achieved.

We never had to try achieving the fifth goal. Alan had done it for us. And to be honest, we were lucky. It probably would have been to big bite to chew at this point, but the adventure was fruitful, interesting and educational. Our first fixed kernel bug is still lying somewhere in the future, waiting for us to smash it with our virtual flyswatter. But, Bug, where ever you are, beware! We are coming after you.